skip to main | skip to sidebar

One of the most talked about bluegrass bands will be coming to The James Garner Center in Troy, North Carolina on Friday, Nov. 21 at 7 p.m. Tickets are $20 for reserved seats and $15 for general admission.

Dailey & Vincent - comprised of Jamie Dailey from Doyle Lawsons' group and Darrin Vincent who played with Ricky Skaggs - will be performing along with the members of their band for a evening of bluegrass.

This group is up for many awards coming up the week of September 29-October 4 during IBMA week in Nashville Tenn.

The James Garner Center is a 500 seat facility with a state of the art sound system and comfortable seating. The facilty is located at 210 Burnette Street in Troy. The town is located 30 minutes south of Asheboro on NC Hwy. 109.

On Friday, August 8, many Tribute members and Maggie Peterson, who played "Charlene" on The Andy Griffith Show, appeared on WFMY, the CBS affiliate for the Greensboro-Winston-Salem-High Point region of North Carolina. The station has aired The Andy Griffith Show continuously since it began.

Cut-in times were 6:25 and 7:25 a.m. Everyone was driving from three different places.... Howard was bringing Opie (and his mom) from Albemarle. That's about 2 hours away from the station. Greta Lint, handling publicity, brought Charlene from Asheboro. That's about 45 minutes away. And Otis and Goober were driving in from Mt. Airy - about 60 minutes away. 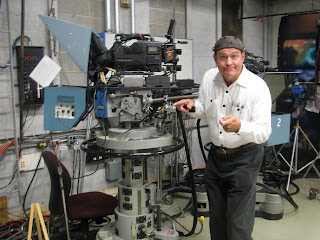 Otis had On-Star in his car. It showed he was on a road that didn't exist. But he's electronically savvy and called the toll free number. Yes, someone answered and directed him to the station. Howard had a Garmon - showing the long way to get to the station. Greta had a heavy foot - and when she got within just minutes from the station, she got stuck behind two Greensboro city cops going 1-4 miles an hour. You read that right. They were purposely slowing down traffic on US Hwy. 29 for some unknown reason. We were only minutes away .... Luckily, Howard was just pulling into the WFMY parking lot. Whew! Someone would make that first live shot! 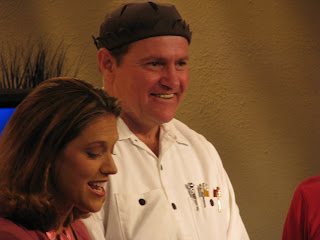 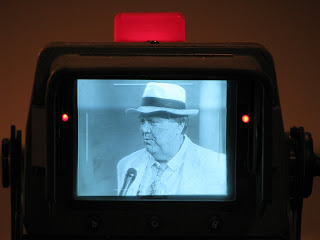 While in the break room waiting for the 7:25 cut-in, we had some coffee cake and coffee from the machines. A small library of books was off to one side - and had 2 books about The Andy Griffith Show in it. Maggie Peterson (Charlene) autographed the page of the book about her character. 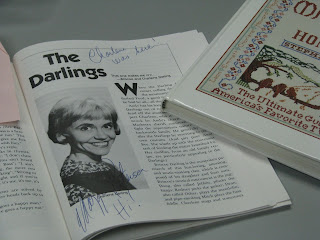 Before we left, the station's chief engineer - the first woman chief engineer at WFMY - greeted Charlene for a hug and gave us a place where we could all take some more photos. Other station personnel came in for the action, too. 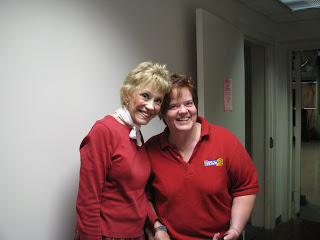 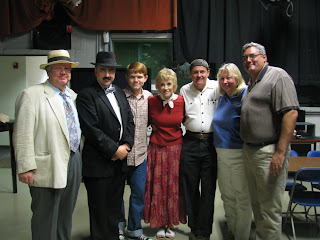 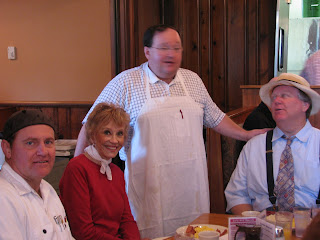 And then we went to Tex and Shirley's Restaurant in Greensboro for breakfast. The manager came over and met us, explaining the history of the place and touting his pancakes. Opie had ordered some and said they were pretty good! Otis got a huge piece of country ham. Charlene had a big bowl of oatmeal, while Howard and Goober ordered eggs and a usual breakfast fare. 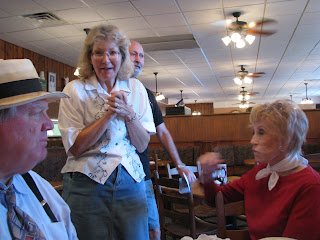 People in the restaurant dropped their jaws as we all walked in - and out. They had no clue that celebrities of screen and stage were in the house. Otis wants to go back for another piece of that great ham!
Posted by Jeff Branch Promotions at 7:56 PM No comments: 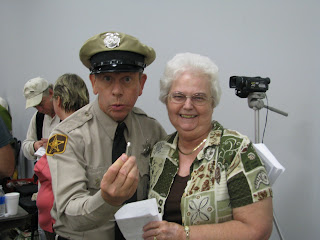 Oh what a great show! Fantastic music - lots of laughter - stories of old .... 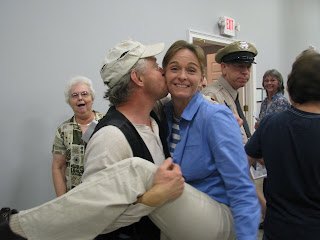 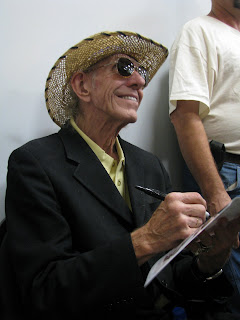 The James Garner Center in T 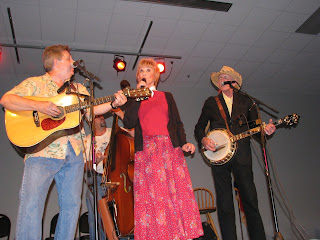 roy, North Carolina, was packed with Mayberry fans on Saturday night, August 9, 2008. They came from several states to see actual stars from The Andy Griffith Show - The Darlings and Charlene. Tribute artists - Barney, Otis, Opie, Howard, Ernst T. Bass, Briscoe Darling, Goober and Ellen Brown. Floyd was out of town and couldn't make the show. (Maybe he was at a hair cutting convention!) 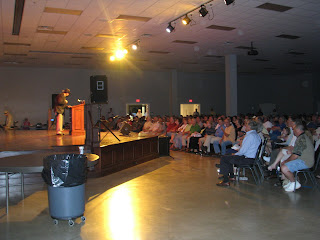 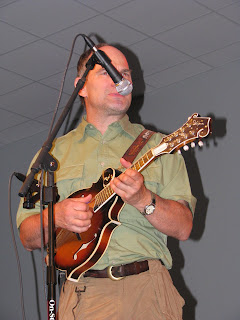 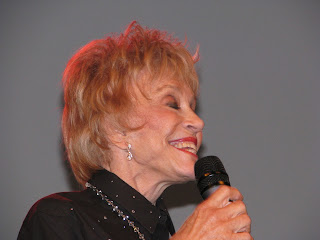 More than 500 people enjoyed the show. The Tribute gang came on first - with Maggie Peterson, who played Charlene on the show - doing a song early on. In real life, she performs in Las Vegas with The Cat Pack. The Darlings - Rodney and Doug - can be seen performing in Branson, Missouri. 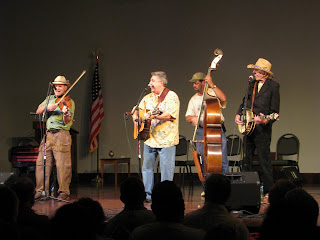 The Darlings gave an outstanding performance and answered a host of questions from the audience. They played tunes from the show - and some others - including one from Bob Dylan. 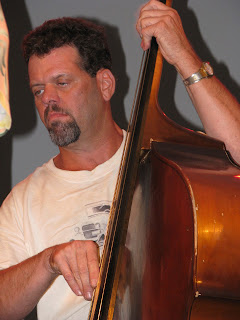 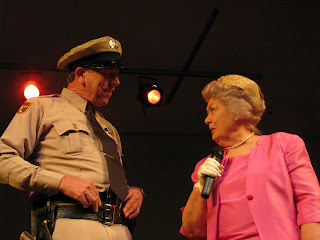 The show ended with most everyone standing in line for autographs, photos and time to talk to their favorite characters. 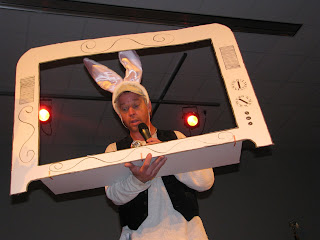 Photos and videos will be posted on You Tube, Fickr and this blog. We encourage you to share your photos too.
(Click on photos to enlarge them.)
Posted by Jeff Branch Promotions at 4:28 PM 2 comments: 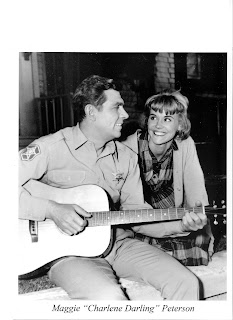 TROY, NC – Hey Andy Griffith fans - do you remember when “The Darlings” brought “Charlene” from the mountains to Mayberry? She had the biggest eyes, brightest smile and wanted to marry “Andy.” Oh, she really liked him!

Actress Maggie Peterson, who played the role of the cute little blonde heartthrob, along with The Dillards and the Mayberry Tribute Artists will be performing in Troy on Saturday, August 9, 2008 at the James Garner Center. Showtime is 7 p.m.Mayberry Nights in Troy is a benefit to raise money for the Montgomery County Drug Abuse Resistance Education (DARE) Program.

Title sponsors are First Bank and the Montgomery County Sheriff’s Department.Tickets are $20 for reserved seats, $15 for general admission and $6 for children ages 6-12. Food and drinks will be provided by the West Montgomery Lions Club. Autograph sessions will be held and cameras are allowed.

“Charlene” only appeared on six segments of The Andy Griffith Show, but helped stir a following that has spanned generations.The show initially was seen on television stations around the country from 1960-1966, including WFMY in Greensboro. The station never stopped running it. Local viewers can see the show on Monday-Friday at 5:30 p.m. “The show has been on the airways somewhere in the world since the first one aired. It’s never been off,” according to Peterson.The members of the Mayberry Tribute Artists are: “Otis” (Kenneth Junkin from Tuscalossa, Alabama), “Floyd” (Alan Newsom from Huntsville, Alabama), “Barney” (David Browning from Bristol, Virginia); “Opie” (Jamie Sullivan from Cowan, Tennessee); “Howard” (Jeff Branch from Oakboro, North Carolina) and “Goober” (Tim Pettigrew from Roofstown, Ohio).

Fans will see favorite skits and songs from the show. There’s no doubt that “Charlene” will sing the crowd-pleaser “Salty Dog.” Yes, there will be plenty of pickin’ and grinnin’ and laughin’.

On the show, “The Darlings” were a family who lived in mountains near Mayberry. They periodically drove into town on their old flatbed Ford truck.

Real life brothers, Rodney and Doug Dillard, who played the roles of “The Darlings.” became ground-breaking bluegrass musicians during their stint on the show. They wound up touring with The Byrds and other top acts of the 1963-1966 era.

Maggie Peterson no longer lives near the North Carolina mountains. Instead she resides in Las Vegas, with her pianist husband. She reflected upon the TV shows saying, “Andy always had every move scripted for us. Those jokes were planned. He was the consummate professional who understood how comedy was supposed to work. I really enjoyed my time on the show.” 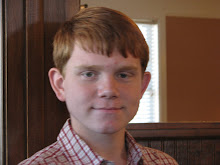